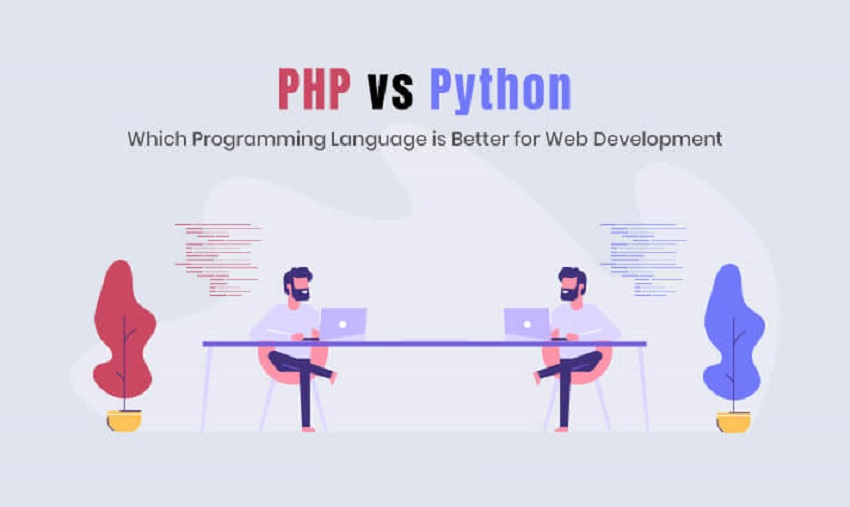 18 Feb PHP vs Python – Which one is better for beginners?

Posted at 19:57h in Blog by administrator 0 Comments
0 Likes

Today we will talk about PHP vs Python ​​with a lot of history and arouse passions and hatred alike, depending on who you ask. However, it is true that due to its characteristics, Python is more complete than PHP because it also allows you to develop software for the desktop, mobile in addition to games.

In this article, we will leave these virtues aside. We will only focus on talking about web development, which is the area in which both intersect and where the two turn out to be very capable of being on a par, were opting for one or the other is more a matter of taste than a technical aspect.

PHP VS PYTHON – IS THERE ANY BETTER THAN THE OTHER? WHICH ONE SHOULD I START PROGRAMMING WITH?

Before we begin to answer this question, we will first focus on talking a little about both languages, then on the point that unites them in web development and their respective advantages and disadvantages. At the end of this post, you will realize that you will already have the answer to your question.

To review a bit of history, we can say that Guido van Rossum was born Python as a general-purpose language in the Netherlands at the end of the eighties.

Its characteristics are that it is a multiplatform and meta paradigm interpreted programming language since it supports object-oriented programming, imperative programming, and even functional programming. This implies that the programmer should not adapt to the language and instead can develop in the paradigm that is most suitable comfortable.

As for PHP, we can tell that in the mid-nineties, Rasmus Lerdorf was created as a scripting language to be used in web development to generate dynamic content running on the server-side and generate the HTML that was sent to the client’s browser.

Over the years, PHP evolved enormously and became a general-purpose language. Although its most widespread use continues to be web development, it is also a suitable language for generating command-line programs and processing batch data.

As we mentioned before, both compete in web development. PHP is the one that undoubtedly leads, not only to Python but also to all other languages ​​destined for the web.

In PHP, it is the foundation of such popular sites as Facebook, Yahoo or Wikipedia, and of well-known and popular software such as WordPress, among hundreds of other projects.

Meanwhile, Python is also present in such popular sites as Google, YouTube, Yahoo!, Disney, NASA, Nokia, and Mozilla, among many others.

Both languages ​​have interpreters on the most used platforms: Linux, Mac, and Windows and their code can be executed interchangeably and always expect the same result.

As for the learning curve, it is short. In Python’s case, it takes a little longer in web development since it was not conceived for it from its origin. It can be said that it was adapted through frameworks.

One of PHP’s main advantages is a large number of frameworks, both general-purpose and specific, for certain types of projects that greatly facilitate development. In Python, they also exist, although the variety is less and where Django is the undisputed leader.

ADVANTAGES OF PHP OVER PYTHON

One of PHP’s main criticisms is that it is programmed very messily and that it can be programmed very badly. Although this is far from being a problem inherent to the language, the problem that this is really like that is the programmer. In other languages, ​​the programmer is bound to respect certain guidelines when writing code.

On the other hand, PHP is much more flexible in that sense and allows that if someone wants to program badly to do so. However, nothing prevents you from being able to program correctly. That is why the fault of the disorder or the untidiness of the code, in any case, is the programmer and not the language.

Another major criticism is the poor support for object-oriented programming, although it is true that at first it lacked it completely and for many years, it does so completely.

As we have seen in this versus PHP vs Python, each of them is an excellent option when developing for the web. In general, both can more than meet any modern and demanding web project’s needs, the decision to choose one. Another will depend on which one we are more comfortable with when programming and our future goals as developers.

Python is a language for almost everything, super complete, characterized by being meta paradigm and multiplatform. On the other hand, PHP is a specific programming language for the web, super useful and one of the most used. If you are going to opt for only web development, it can be a good choice, but you will be limited in the future.

If we do not know either of the two yet, perhaps we should dedicate that time and effort that it will take us to learn a new language to master Python because, in the long run, we will be able to use it in many solutions without having to learn a new language. After all, Python also allows desktop, mobile, games, and many other programmings, making it an excellent option to consider. PHP vs Python? It depends on where you want to direct your career.

Keep reading How to open PHP file in chrome, other browsers, and operating systems?