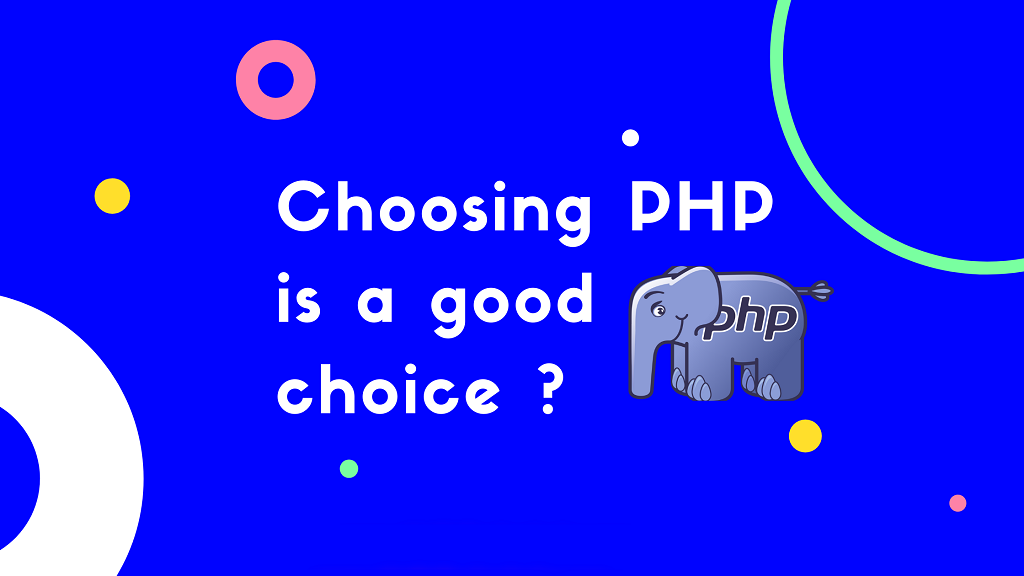 17 Feb Why PHP is a good choice for web development

Posted at 15:44h in Blog by administrator 0 Comments
0 Likes

PHP is the most widely used web programming language in the world. 80% of websites use PHP. However, we hear a lot on the internet that PHP is just a bad programming language. But, it isn’t true. I have explained here why PHP is a good choice for web development.

Why PHP is a good choice for web development?

To make it short, PHP is a good and open-source programming language. It has flaws like all other languages. Critics of PHP often come from older versions, which were extremely messed up.

Today, PHP is everywhere. You just have to see WordPress, the most used CMS on the web. It is totally dependent on PHP and millions of websites use this CMS daily.

PHP has a lot of advantages. It’s a simple language to learn, quick to use, and overall effectiveness. We will see together the different reasons to learn PHP, especially if it is your first backend programming language.

PHP is friendly of beginners

It is very easy to start PHP. It is a simple language and extremely understandable. PHP was created to be simple. In fact, many newbies can create PHP sites by copying bits of code together. The syntax is very intuitive, and it is possible to do a lot of things in a few lines of code.

The last version of PHP, that is to say, the 7th, has solved many of the complaints that one could make with the language (as said above). This version is stable and very efficient.

PHP is well documented. If you have the slightest error, you will find explanations on the official doc or on forums in a few minutes.

PHP is an interpreted language, i.e., the code does not need to be compiled. This particularity gives it great flexibility and great simplicity.

Interpreted languages ​​do not have to deal with memory or pointers issues. The code is simpler and, overall, much shorter.

Finally, PHP is a weak typing language (also called dynamic typing). This means that the variables do not have to have a type defined in advance. For example, you can create a variable without saying it’s a number or a list, which greatly simplifies the code.

PHP code is not the easiest to maintain. The classic imperative code, that is to say, a code without object-oriented programming and a system such as MVC.

PHP code is not easy to maintain from the ground up because it is a very simple interpreted language, so it is difficult to track errors.

Fortunately, the application of programming and organization techniques makes it possible to have an easy-to-maintain code because it is separated into several parts that can be easily broken down and analyzed. Keep reading A Beginner’s Guide to Learning PHP

The speed of PHP code

PHP is not the fastest programming language. You will read all over the internet that PHP is slow and, therefore, a bad language.

The people who say that don’t take important data into account, all web development languages ​​are slow and 99% of the load times are not the language’s speed but the download time of the pages.

Yes, PHP is not the fastest programming language. But yet, Facebook uses it for their website, and the site is far from slow.

There is always a way to optimize PHP code’s speed, in particular by compiling it via HipHop.

When you are new to the world of programming, you inevitably feel lost. You don’t understand a lot of things and you will spend hours researching things that you think are silly afterward.

The community is what will get you out of the mess. If you have a problem, watch a video on youtube, read an article, or ask a forum. Chat with other programmers, exchange ideas, and learn things.

Learning programming on your own from a book without ever interacting with other programmers is a terrible idea. You lose a lot of tools that could save your life.

Stack Overflow is the world’s largest programming forum. Seriously, if you have a problem, you already have the answer on Stack Overflow.

If PHP is the 3rd largest community, imagine the number of questions and answers already on the site. There are probably more answers than PHP developers.

The 5th most popular programming language on GitHub

Github is the world’s largest IT project management site. Millions of lines of code are stored on GitHub.

PHP is the 5th most popular language, which means hundreds of thousands of PHP projects developed in Open Source.

PHP is popular for web development, it’s a solid choice and these numbers show it to us.

Finally, PHP is the most widely used web programming language. Remember, WordPress and Facebook depend on WordPress.

Millions to billions of websites use PHP. It is, therefore, the language best suited to most needs. Yes, there are faster and better-performing languages, but PHP is suitable for most projects.

PHP is a great choice if you want to learn web programming or just want to learn a new language. Remember, there are no perfect languages. Many of the criticisms leveled at PHP are no longer valid and anyway, every language has its flaws. PHP is the world’s most widely used web development language, and there’s a reason behind it. It’s the choice of security and reliability, not the fastest or most efficient language, but you can trust it